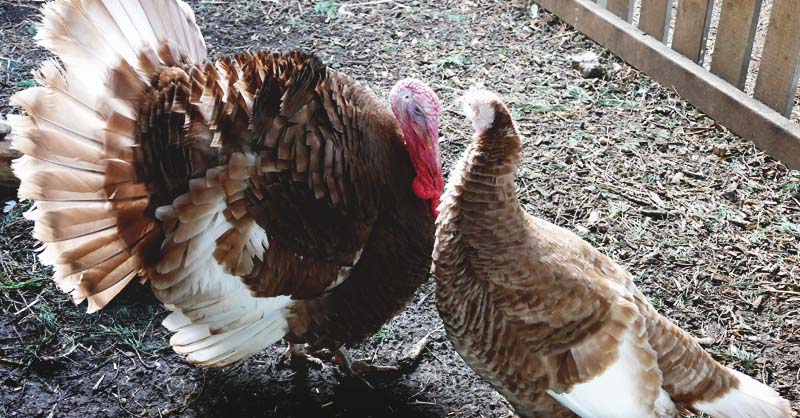 I don’t think anything says regal quite like the image of a proud Bourbon Red tom walking around being a showoff.

Bourbon Red turkeys are raised primarily for meat and are well loved by many small scale homesteaders for their heritage breed qualities and majestic appearance in the farmyard.

After losing popularity due to newer and larger breeds for meat production, Bourbon Reds have made somewhat of a comeback. The average number of Bourbon Reds left in the United States dipped dangerously low and continue to need help climbing.

Bourbon Reds were bred in Kentucky and accepted into the American Poultry Association in 1909. The appearance of the Broad Breasted White turkey caused a decline in the popularity of Bourbon Reds.

Even though Broad Breasted Whites can offer a higher meat yield, Bourbon Reds are loved for their heritage qualities and are a top pick for many homesteaders.

Bourbon Reds are relatively larger than many breeds of turkeys, which is what makes them more ideal for meat production.

A fully matured tom turkey can be expected to reach up to 32 pounds. Your turkey could be bigger than your dog! Fully grown hens weigh approximately 18 pounds.

Nearly all turkey keepers report wonderfully friendly and sweet demeanors in their Bourbon Red turkeys. There can be an occasional aggressive or territorial male, but that’s mainly towards rivaling males.

As far as human interaction goes, Bourbon Reds are pretty friendly birds with an outgoing and affectionate personality.

Since meat production was the primary purpose of breeding these turkeys, you shouldn’t be disappointed by their output.

Bourbon Reds can sometimes be a bit challenging to pluck according to some turkey keepers, but their meat is worth it.

A nicely dressed carcass from a Bourbon Red should be somewhere in between 14 and 23 pounds. Bred primarily for their nice breast meat, this is an excellent choice for a table bird.

The cycle of turkey egg laying is a bit more fickle than one might find in chickens.

Bourbon Reds reach sexual maturity between 7 and 8 months of age but generally won’t begin laying until the spring after they hatched. Sometimes a hen might lay a few eggs in the fall before winter begins but will stop production for cold winter days.

Egg production in turkeys can significantly vary based on weather and broody schedule, but you can expect approximately 160-180 eggs per year from a single hen.

Young turkeys are rapid growers and require more protein than most poultry types. It’s best to supply your poults with a 30% protein starter until your poults reach 8 weeks of age.

Once your poults are 8 weeks old, transition them to a good flock raiser with 20% protein, but high-calorie content.

If you are raising your turkeys for meat, you can keep your turkeys on this flock raiser until butchering time. However, if you have turkey hens laying eggs, it is best to put them on game bird laying feed during laying season.

If possible, keep your tom turkeys on flock raiser while your hens eat the laying feed. During the season when your turkeys are not producing eggs, you can put the whole flock on their flock raiser.

Being a heritage breed, Bourbon Reds are good at foraging and can do well in a free range environment. Bourbon Reds also tolerate confinement if that’s what you choose to do.

The bright side of free-ranging Bourbon Red is their lack of susceptibility to common daytime predators such as hawks.

Inside your coop, you will need to provide 8-10 square feet per adult bird to make sure everyone has adequate space. When providing roosts, take care to place them no more than 18 inches off the ground.

Jumping off high places for large birds such as turkeys can cause leg and feet issues. Outdoors, you will need to provide a half acre of space for every dozen turkeys.

While Bourbon Reds are not especially susceptible to any health issues, Blackhead is a common health issue that plagues many turkeys.  It’s important to learn the signs and prevention for Blackhead so you can maintain a healthy flock.

Chickens are not as vulnerable to Blackhead as turkeys are, but they can be carriers of the parasite and get turkeys sick. It’s generally best to house your turkeys and chickens separately if you own both types of poultry.

In addition to Blackhead, keep a close eye out for internal and external parasites on your turkeys such as worms, mites, and lice. Make sure they have plenty of dust bathing space to rid themselves of the pesky critters.

A watchful eye on your flock to catch any issues early on so you can treat your birds, is key to maintaining a happy and healthy flock.

Breeding programs have been tossed by the wayside by many people over the years. This has resulted in some less than stellar breeding lines. When breeding Bourbon Reds it is important to select for qualities such as rate of sexual maturity, adult weight, production, and disposition.

With careful selective breeding from some dedicated breeders, Bourbon Reds can once again reach their full potential and continue recovering from their endangerment.

One great thing about Bourbon Reds is their ability to breed naturally. This means no artificial insemination for you to have to deal with!

The Bronze turkey was one of the foundation breeds for Bourbon Reds and is still a fantastic breed today.

Like the Bourbon Red, Bronze turkeys suffered a downfall with the appearance of Broad Breasted White turkeys.

However, Bronze turkeys were one of the most popular breeds before that and are regaining their spot. You will find Bronze somewhat resemble Bourbon Reds, but weigh a small amount less.

Bourbon Reds are a great heritage breed that belongs so well on many farms and homesteads; I’m sure you’ll love these fun turkeys! Consider adding some to your flock; they’ll add beautiful eye candy to the yard!