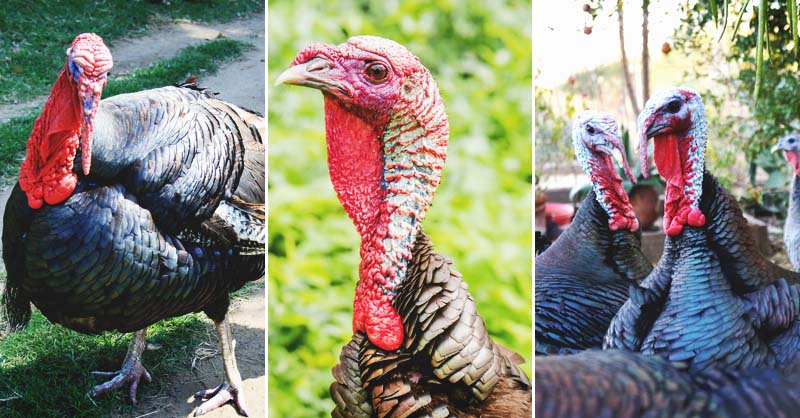 “Oh, my sweet darling, what a long, beautiful snood you have!”

This is something I tell my pet turkey, Woodford, almost daily. When others hear me say it, they look at me quizzically. That’s because most people have no idea what a “snood” is!

In fact, until a few years ago, I had no idea either. But when my rafter of male turkeys started to mature, and their faces began to grow what clearly looked like the facial equivalent of a penis, I had to find out.

If you have questions about turkey anatomy that you’ve been afraid to discuss in public, then read on for an inside look at some wonderful things every turkey owner, admirer, or eater should know.

I bring this up because most non-heritage breed turkeys end up on the dinner table long before they begin to display the majestic qualities I am about to describe. However, because heritage breeds are raised for flavor, and mature much more slowly than the standard white turkeys you find in your grocer’s freezer, their lives are longer.

Heritage breed turkeys are also able to naturally reproduce. So many people keep these kinds of turkeys to mate, lay and hatch eggs.

Now, there is a possibility that you’ll see these qualities in a commercial breed turkey anatomy. But, on the whole, you have a better chance of seeing them in heritage breed and wild turkeys.

No one can deny that a male turkey, called a Tom, in full feather is one of the most incredible spectacles you can see on a homestead or in the woods. In my humble opinion, a mature Tom is almost as bedazzling as a peacock if you pay attention to the details.

Let’s take a closer look at turkey anatomy to understand why.

That snood I mentioned earlier is a piece of flesh that sits on a young turkey’s forehead like a unicorn horn in resting position. At the outset, it appears similar in both male and female turkeys. However, as the males begin to mature sexually their snoods elongate.

Snood size increases with age. It also elongates when turkeys strut and shrink when they are at rest. In older male turkeys, the snood is at full length so often that it’s hard to see it at rest.

The snood also changes colors. The resting color of the snood varies by breed. They usually range from pinkish to red. When turkeys strut, particularly for long periods of time, the snood gets darker red.

From a human perspective, the snood seems like an incredibly impractical device. It covers turkey nostrils often making it difficult for a turkey to breath deeply. It’s position also makes it more difficult for males with long snoods to peck at food on the ground or pick seeds off plants.

When male turkeys fight to establish a pecking order, they often use their beaks to pull on each other’s snoods. One turkey will pull another turkey around by their snood for several minutes until they either get free or submit.

Despite these inherent complications, turkey hens are purported to favor long snoods. A long snood is the turkey equivalent to a show of virility.

Another striking feature of male turkeys are the lumpy caruncles that wrap around the base of their neck like a red scarf. These are called the major caruncles.

All the mottled coagulation of shiny, leather-like skin that wraps around the turkey’s head like a hood and runs down their necks are also considered caruncles. Generally, the caruncles are dark red when a turkey is excited. However, near the eye area, the caruncles turn blue instead.

Turkeys have the power to control their caruncle coloring by contracting blood vessels in the caruncles. This kind of work like muscles being flexed.

Turkeys have a wattle growing beneath their chins along their neck line. It blends in with the caruncles unless a turkey is extending their neck. When at rest, it’s basically a thin, fold of floppy skin.

Wattles are used to help regulate body temperature. When turkeys get hot, you might notice them extending their neck to expose their wattles. When they are cold, turkeys keep their wattles tucked under their chins so they are barely noticeable.

Females have shorter, narrower wattles than males. Females are also smaller, have fewer feathers, and don’t have to do all that work of strutting and fighting that males do. So, it makes sense that they would not need Tom-sized wattles to regulate their body temperatures.

The beard looks and feels a lot like long, black, plastic broom bristles. Some people liken it to a horsetail. Turkey hunters often collect beards as souvenirs of their kill.

Wild turkeys tend to have longer beards than domesticated turkeys. Wild turkey beards can grow up to a foot long. Females can also have beards, but they are much shorter and less noticeable than male beards.

Like roosters, toms also have large spurs as part of their normal turkey anatomy. Females can grow spurs, but they tend to be more rounded and less pronounced. (Turkey feet also appear distinctly pterodactyl-like, in my opinion.)

When at rest, male and female turkey feathering appears similar. The females are noticeably smaller, but otherwise, it can be difficult to distinguish them from males based on their feathers alone.

When a male turkey struts, though, the feather differences become unquestionably different.

They stand erect like a fan. When in an upright posture, the turkey can angle them from left to right like a ship’s rudder to direct them at their target audience.

Females can also fan their tail feathers in similar displays. However, they never achieve the same upright positioning. They also don’t maintain it as long. When used by females, it is usually only for the purpose of establishing a pecking order with other females and not for pure show.

Wing feathers are also more for show or use in fighting than flight in male turkeys. At rest, they tuck up along the body and blend with the belly feathers.

Toms also hold their wings away from their body to appear more menacing when fighting. Additionally, they will strike with their wings and use them like arms to subdue their opponent.

Male turkeys also use their wings to enfold submissive females as they mount them for mating.

Those wing and tail feather displays are made possible by small muscles located at the starting point of each feather. Toms have the ability to flex the feathers muscles at will to make them stand erect. They can also maintain a flexed position for extended periods of time.

When they do, this is what we call strutting. Toms strut their stuff for all onlookers to see how gloriously handsome they are.

At times when strutting, males may make a ticking or tsking sound with their beaks. This is sometimes called “spitting”. Sometimes liquid is ejected during this process.

Turkeys also make a kind of drumming sound that comes from their body area. Personally, I think it sounds like some kind of hydraulic or compression system at work.

There’s not a lot of information about how or why turkey toms do these things. But, from watching my turkey Woodford, he seems to do it more often around a large crowd of admirers or when he’s been strutting for a long time.

As best as I can tell, spitting clears his nostrils and moves his snood for a second so he can draw in a big breath. He also opens his mouth at the same time.

The drumming seems to be like drawing in a power boost so he can maintain his flexed feather position. It causes a ripple through his whole body and he often shuffles his steps. Then, his body and his feathers also appear more erect. He often tilts his tail fan more often after spitting and drumming.

Some people say turkeys spit and drum even when not strutting. Personally I have never seen my turkey do either when he’s not strutting. I have also never heard a female turkey drum.

Just like chickens, turkeys have an annual molt. And thank goodness they do! By the end of the mating season, between dragging the wing feathers to strut and fight, male turkeys can look quite a bit worse for wear.

Female turkeys also often get a bit beat up by the mating process and need a new set of feathers before winter.

Toms have two more traits that you generally don’t see in female turkeys.

They gobble if you gobble. This can provide endless entertainment on the homestead if you like to gobble!

Toms also do the turkey equivalent of a sumo wrestler belly bump. The only difference is they use their puffed up chests instead. It’s pretty magnificent to watch.

So, there you have it. All the things you need to know about turkey anatomy and then some!

Now when you hear someone compliment their turkey on having such a long, beautiful snood, you won’t have to look at them quizzically!