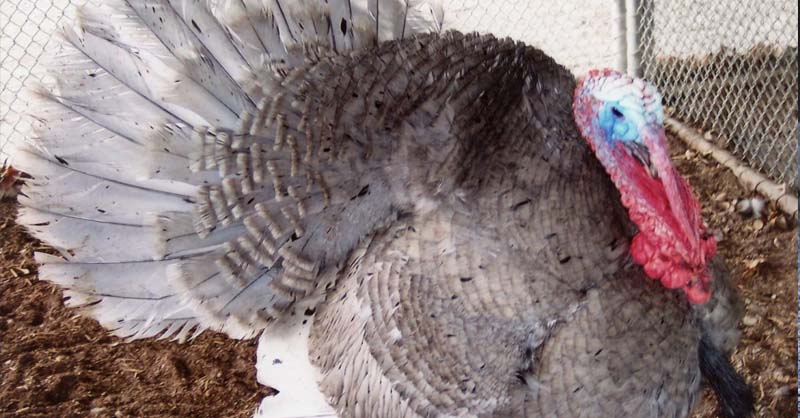 I believe Slate turkeys may be some of the prettiest turkeys I’ve had the pleasure of witnessing. Of course, I’m rather partial to blues and lavenders so that may be why, but they are certainly gorgeous birds. This turkey makes a fantastic addition to farms that are especially passionate about heritage and maintaining endangered breeds.

Due to some breeding that has been less than attentive, these birds do need some help getting back to their original glory. This could be a fantastic meat producer or breeding project if it suits your fancy.

The slate color is a genetic mutation, similar to the blue gene found in chickens. It is suggested that the breed originated via crossing a black and white turkey, but from what we can tell with genetics, this may not be the case. This breed was accepted into the American Poultry Association in 1874.

Slate turkeys are relatively well known for their docile temperaments. Males can be somewhat territorial and aggressive but are generally agreeable. Selective breeding only even-tempered birds can go a long way in ensuring you have well-behaved turkeys.

Fully mature turkeys are a decent size, making them an ideal choice for meat production. Hens weigh approximately 18 pounds at full-grown size. Toms can weigh up to 33 pounds when they have reached adulthood.

As with most turkeys, the primary use for this breed is meat production. There are many reviews of this breed having flavorful and delicious meat, including a large amount of dark meat. A heritage breed such as the Slates will take between 25-30 weeks to reach peak maturity, so think about that when ordering your Thanksgiving birds!

Turkey keeping for the primary use of egg production is not very practical. However, these turkeys lay attractive cream or light brown spotted eggs that are beautiful! Turkeys do have slightly more specific laying seasons than chickens.

Most turkeys mainly lay in the spring and summer months. Many turkey keepers have reported odd patterns such as laying only in the fall or year round, so you might never know what you’ll get!

How to Care for Slate Turkeys

Young turkeys grow rapidly and thus need more protein than most poultry types. Poults need to be supplied with 30% protein starter until your poults reach eight weeks old. Once your birds reach eight weeks old, switch them to a high-quality flock raiser with 20% protein and high-calorie content. Your birds can remain on this flock raiser until it comes time for butchering if that’s what you’re raising them for.

If you have a flock year round and turkey hens laying eggs, it is best to put them on game bird laying feed during laying season. It’s best to keep tom turkeys on flock raiser while turkey hens eat the laying feed. During the season when your turkeys are not producing eggs, the whole flock will do just fine on a flock raiser.

Turkeys make a fantastic candidate for free ranging. Fencing in an entire flock of turkeys requires a large amount of materials and time. These large birds don’t need the protection of a fence quite as badly as chickens may because their size deters the most common predators.

Stray dogs and coyotes are still an issue, but predators such as hawks will leave them alone in search of smaller prey.

Inside your coop, you will need to provide 8-10 square feet per adult bird to make sure everyone has plenty of space. When building roosts, make sure to place them no more than 18 inches off the ground. Hopping off high places for large birds such as turkeys can cause leg and feet problems. Outdoors, you will need to provide a half acre of space for every dozen turkeys.

Slate turkeys are not specifically susceptible to any health issues. However, Blackhead is a common problem that affects many turkeys. Learn the signs and prevention for Blackhead to keep a close eye out for it and catch it early.

Chickens are not as vulnerable to Blackhead as turkeys are, but they can be carriers of it and get turkeys sick. Many poultry keepers will house and range their chickens and turkeys together, but it’s recommended not to do this, to help prevent the disease from spreading.

As with all types of poultry, keep your eyes peeled for internal and external parasites on your turkeys such as worms, mites, and lice. Make sure they have plenty of dust bathing space to prevent infestations of these annoying bugs.

Slate turkeys vary in several different colors such as lavender, ash, and black. However, if you are interested in exhibiting your breed, it’s best to breed for ash and gray colors, which is where the name “slate” came from.

Although some breeds of turkeys require artificial insemination, these turkeys can breed naturally, making your job much easier.

Some people speculate that Slate turkeys are a result of crossing the Black Turkey and a White Turkey. There is minimal genetic evidence to support this theory, but there are definitely some similarities. Black turkeys will dress out at approximately the same weight as a Slate turkey.

Turkeys have fantastic vision! While humans get to see about 180 degrees, turkeys have a 270-degree visual radius! I wouldn’t try sneaking up on one of these birds! On top of their fantastic sight, they can run up to 25 mph. Basically, turkeys can probably evade your efforts to catch them if they really feel like it.

This is a beautiful turkey with some fantastic qualities that make it a great option for the homesteader life! If you’re considering a debut into turkey keeping, this might be an excellent breed to consider.