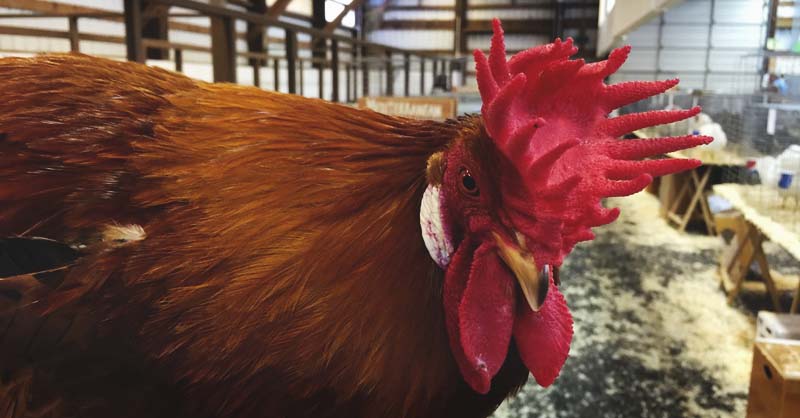 Say hello to the Sicilian Buttercup! Looking rather tall and majestic, you won’t find another chicken that looks quite like these birds.

In addition to their gorgeous black spangles on top of gold feathers, these chickens have a comb that appears to be a regal crown.

These perky Sicilian Buttercup chickens are a treat to see in the yard and many people have adored these birds since they were first discovered on the island of Sicily.

Sicilian Buttercups have been in America since they were originally imported around 1860 by a captain who brought along some of these birds to provide food for his crew.

In 1912, the breed was incredibly popular throughout the country, As of 1918, the Gold Sicilian Buttercups were admitted into the Standard of Perfection with the American Poultry Association.

Since the original admittance of the Gold Sicilian Buttercups, there have been no color variations accepted into the American Standard of Perfection.

Sicilian Buttercup chickens are a rather petite bird. The average weight of a Sicilian Buttercup is between 4 and 5 pounds. Paired with their tight fitting feathers, they just don’t exactly look like big birds!

Their small size and large comb make them a very ideal breed for hot climates.

As with most chickens in the Mediterranean class, Sicilian Buttercups are active and rather wary of people.

You will almost never come across a broody Sicilian Buttercup. All of these birds are flighty and fairly unpredictable.

This characteristic makes these birds nice candidates for free-ranging, but not backyard pets.

Due to their rather small body size, Sicilian Buttercups are very good at converting feed into eggs at an efficient rate making them a nice option for feed efficiency.

Due to their small body size, this is not a very good breed for meat production. If you had an extra rooster, it would do fine thrown in a soup pot, but wouldn’t yield much meat.

Many chicken keepers choose to raise Sicilian Buttercups because they don’t require nearly as much feed as some breeds, making them a cost-effective option.

Sicilian Buttercups do not require a special diet. Provide chicks with a good quality chick starter until 16-18 weeks of age.

When your birds reach 4-5 months of age, they are ready to start laying and need to be transitioned to a laying feed.

Provide supplemental calcium, such as oyster shells in a separate dish so your hens can eat it as they need some.

Sicilian Buttercups tolerate confinement rather poorly, and it is best to only consider this bird if you have the ability to free range your flock.

Sicilian Buttercups are generally rather healthy birds that are not prone to any specific health issues.

Some chicken keepers have reported leg issues in their Sicilian Buttercups, but nothing of any significance has been found on the subject.

Keeping your flock well maintained will go a long way in preventing any possible health issues. Common issues to keep an eye out for in all chickens include parasites, listlessness or general lethargy, and sneezing/coughing.

These beautiful birds are in need of more chicken keepers interested in breeding Sicilian Buttercups.

Despite their fun and exciting appearance, Sicilian Buttercups, are in somewhat of a decline. These birds are listed as rare or threatened on their conservation status.

These are also some of the most beautiful chicks I’ve seen, such adorable markings!

Leghorns make a nice alternative to Sicilian Buttercups if you love the idea of a feed efficient bird but want better egg production.

Surpassing Sicilian Buttercups by 100 eggs a year, Leghorns generally lay about 280 eggs per year and have just as good feed efficiency.

With their beautiful feathers and active personalities, Sicilian Buttercup chickens a rather perky addition to your yard.

If you have room for them to free range, you will love these little personalities and their pretty white eggs.