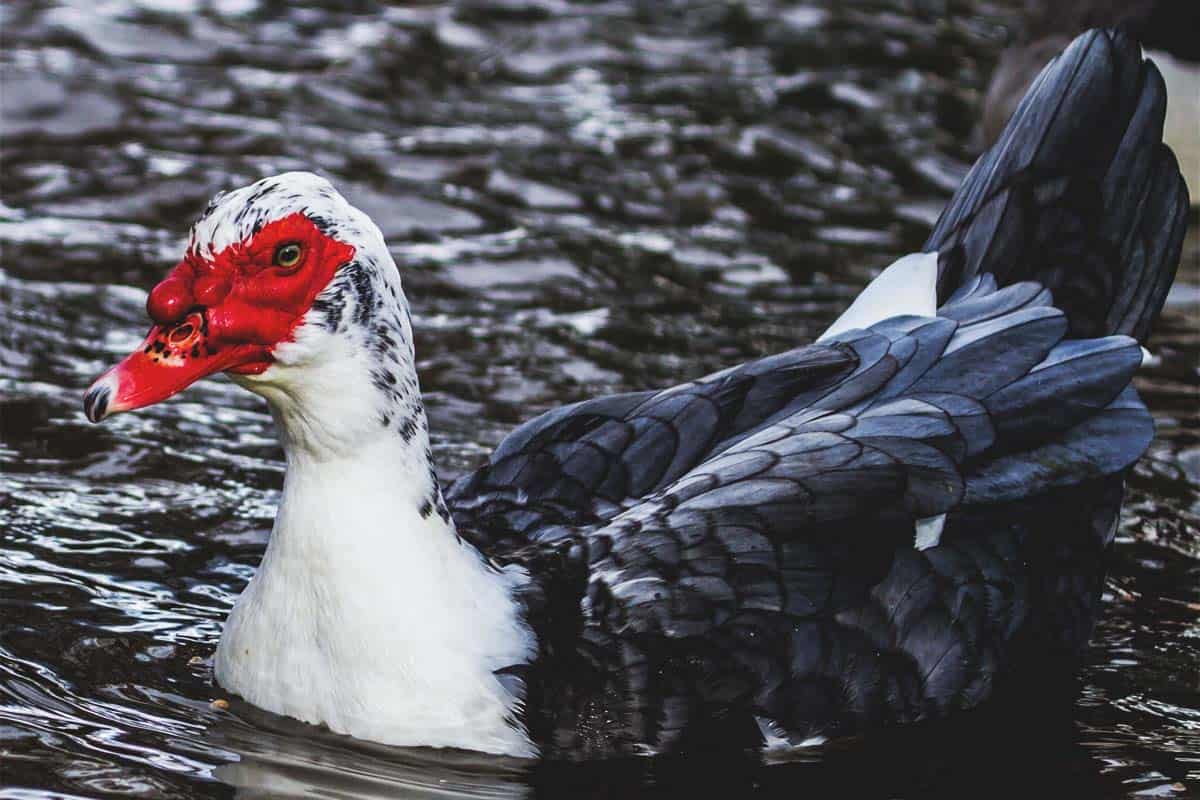 Most people have a surprising reaction when seeing Muscovies for the first time. While Muscovies are clearly ducks, they do have some very interesting features that you won’t find on other ducks. First of all, have you seen a Muscovy’s face? I won’t lie, I wasn’t exactly sure what to think when I saw a Muscovy Duck for the first time.

Apart from their eye-catching faces, these ducks are significantly larger than most ducks.

Muscovies aren’t the champions of egg-laying, but they do have many excellent traits that help them fit into different homesteads.

Another thing that sets Muscovies apart from other duck breeds is their heritage. Muscovy ducks are the only duck breed that did not originate from the Mallard duck. The Muscovy has been domesticated, but still has many wild tendencies that give it a very different disposition than most ducks.

Also, what is it with their faces? The large amounts of red, bubbly looking skin on a Muscovies’ face is completely normal and part of a healthy Muscovy. The red flesh is called caruncles, and it helps the duck to stay clean and bathe. Tiny oil glands exist on the caruncle and slowly deposit oil to help with preening when a Muscovy is in the water.

There are many color variations of the Muscovy that can be found, including the black, lavender, blue, white, bronze, and chocolate. With such fun color varieties, you should be able to find one that suits your fancy.

Muscovy ducks are no doubt one of the largest ducks you can find. A fully grown Muscovy drake can weigh up to a whopping 15-pounds, which is over twice the size of most domesticated ducks. Muscovy hens naturally weigh a bit less, but they’re still not too small, weighing around 7 to 8-pounds.

When it comes to their disposition, all Muscovy ducks still tend to act like wild ducks. Unlike most domestic ducks, Muscovies are quite capable of flying and will do so if they feel startled or frightened. You will find that these birds definitely aren’t the most friendly ducks out there.

One huge benefit to Muscovy ducks is their excellent mothering capabilities. A single hen can hatch and raise two dozen ducklings with high success rates. Anyone who wants a good mother duck should certainly consider a Muscovy hen or two.

Many ducks can proudly boast yearly averages of 300 eggs per hen, but Muscovies fall short of this number by quite a bit. If you’re looking for a good egg producer, consider a duck-like the Khaki Campbell, because a single Muscovy hen usually won’t lay more than 130 duck eggs in a year.

While a large Muscovy duck can yield a decent amount of meat, these ducks are not the most economical duck you can raise. Muscovies eat a whole lot of food and take a long time to reach a full-grown weight. That being said, many people choose to raise Muscovies for meat and I can’t say that I blame them.

A fully grown drake will produce a large carcass that can easily feed more people than your regular duck. In addition to the amount of meat they produce, Muscovy meat has been hailed as lean and tender meat, sometimes compared to veal for its flavor and texture.

Growing ducklings require higher levels of Niacin than chicks, otherwise, they will grow up with severe vitamin deficiencies. It is possible to feed ducklings chick starter, but never feed them medicated chick starter. When feeding chick starter to ducklings, mix in brewer’s yeast at a ratio of 1 tablespoon to a cup of feed.

Brewer’s yeast is one of those must-have items to always keep on hand for any possible B3 deficiencies, which are very common in growing ducks.

Grown ducks do best on flock raiser pellets, which will meet all their nutritional needs for health and egg production. For those raising ducks and chickens together, you can safely feed your ducks the chicken laying feed and everyone will be just fine.

It’s very important to always feed your Muscovies near their water because ducks need to eat and drink at the same time to prevent choking on their own food.

When it comes to housing requirements, Muscovies naturally demand more than your average duck because of their size. Inside your duck house, you’ll need to provide a minimum of 6-7 square feet per duck. Outside in the run, 15-20 square feet per duck is ideal to make sure that everyone has adequate room.

Due to their undomesticated instincts, Muscovy ducks have a very strong urge to roost, unlike most ducks. Given the opportunity, a muscovy will roost high in a tree, the barn loft, or even on a roof. To satisfy their needs, make sure you provide plenty of roosting space for your Muscovies.

Although Muscovies are generally a very hardy breed, they do have some susceptibilities that most ducks don’t. While most ducks are extremely cold hardy, you’ll need to be very careful with Muscovies in cold temperatures due to their caruncles. A frostbitten caruncle would no doubt be very painful and could cause health issues.

It is also worth noting that in a study involving many different types of poultry including turkey, chickens, guineas, and some wild birds, Muscovy ducks seemed to be much more vulnerable to frequent infections of bloodsucking parasites. Make sure to frequently check your Muscovies for signs of parasite infection and treat as quickly as possible.

When it comes to breeding these ducks, you might not even have to incubate or brood many ducklings. Muscovy hens are exceptional mothers and a single hen can sometimes raise as many as four clutches of ducklings in a single year.

While most duck eggs tend to hatch in 28 days, a Muscovy incubation period is 35 days. If you’re used to raising chickens and hatching eggs in a mere 21 days, you’ll have to get a bit more patient when breeding a Muscovy.

For those searching for a reliable meat breed, but don’t want to spend months feeding these eating machines before eating their meat, consider the Pekin.

The commercial meat industry primarily uses Pekins for the majority of their meat production. This duck is bred to grow quickly, reducing your feed costs, and produce a sizable amount of meat for your dinner table.

Muscovies don’t fit in on every farm, just like any animal. However, if you have space to house these big ducks, they certainly make a unique addition to your farm and you will have everyone asking about your ducks with the red faces. 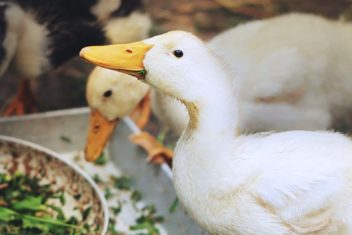 10 Important Things to Consider When Building a Duck Coop