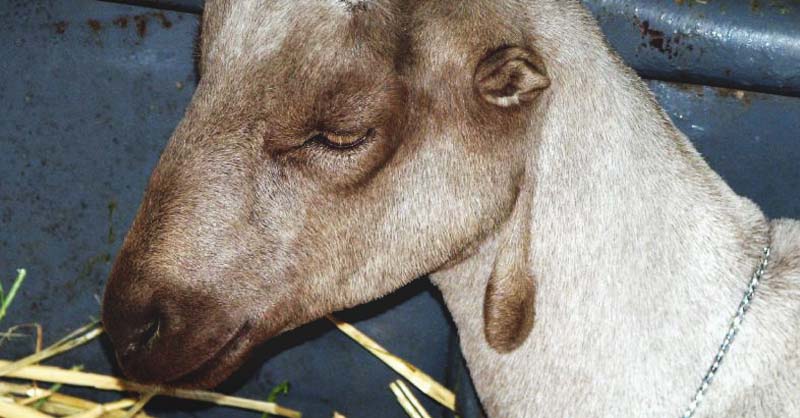 If you are thinking about bringing home a friendly, cooperative, long-milking, and adorable dairy goat, American LaMancha Goats might be the perfect breed for you.

Many of us think of the Man of LaMancha, or Don Quixote, when we hear the word ‘LaMancha.’ Which, of course, then leads to the assumption that LaMancha goats must be Spanish in origin. However the American LaMancha, also called just LaMancha or Lamancha, is the only breed of dairy goat developed in the United States.

LaManchas were originally bred by Eula Fay, in California, starting around 1927. They became an officially recognized goat breed in 1958. The breed as we know it today is most-likely developed from crosses of Spanish, Toggenburg, Alpine, and Nubian goats. However, short-eared goats from a farm in LaMancha were shown at the 1904 World’s Fair.

So, in a bit of confusion, the farm address evolved into the breed name. After that these short-eared goats with distinctly multicultural origins became known as the LaManchas.

Today, LaMancha dairy goats are easily recognized by their gopher or elfin style ears. The exact ear standards for breed acceptance, according to the American Dairy Goat Association (ADGA) are as follows:

They can come in any color as long as they have sleek, short coats. Attributes such as good udder attachment, straight backs, strong legs, and elegant appearance are also valued.

Beyond those basic requirements necessary for being considered part of the breed, well-bred LaManchas goats also have other exceptional qualities that make them excellent for use as dairy goats on the homestead.

Here’s what you can expect from LaManchas that are living up to their full breed potential.

LaManchas can have very good dairy production and relatively high milk fat content. A good dairy LaMancha will average about 2100 pounds of milk in a 284 day milk period. That translates to roughly 2/3rd to 3/4ths of a gallon of milk per day. Peak production tends to begin around 4-6 weeks after kidding.

For overall production and milk fat, LaManchas line up very closely to the Oberhasli breed. They are generally not quite as productive as the Alpines or Saanens. However, they tend to have higher average milk fat content, of about 4% versus 3.4%, relative to those higher production breeds. Their typical milk production is greater in quantity, though not quite as high in milk fat, as the Nubians.

Also, productive LaManchas are routinely milked for at least two years with continued good milk production. That longer time between freshenings can cut down on breeding costs and complications. Plus, it means less lost milking time due to pregnancies.

Although the LaMancha breed was perfected in the U.S., the breed likely does have Spanish ancestors. It is believed that the founding parents of today’s LaMancha goats were originally brought stateside by Spanish missionaries and were specifically chosen for their hardiness.

The hardiness of the LaManchas is still typical of the breed today. They are purported to maintain good milk production even in harsh conditions. They are also considered suitable for almost all climates. However, due to their short coats, they will require cold weather protection.

Although LaManchas do not have the same frostbite risks as floppy-eared goats like the Nubians, their lack of ear covering means they do need proper protection from the elements.

Although the LaManchas are primarily considered a dairy goat breed, some breed lines do tend toward stockiness and may also be used as a potential meat source.

Like all good dairy goats, LaManchas tend to be easy to work with on the milk stand. They can also be very affectionate if well-socialized.

They are known to be curious, alert, and clever. Because they can be so intelligent and love being around people, this breed needs good, strong fences to ensure they stay put. They also make a good match for the kind of goat owners who spend lots of time petting and loving their goats.

Since the American LaMancha goats are primarily a dairy breed, you will need to breed them regularly to maintain their milk flow. Here are some details you’ll want to know about LaMancha breeding.

LaMancha goats are seasonal breeders. In the US, their typical mating season can run from as early as September through as late as March, depending on climate.

Some owners report that the breeding windows for LaManchas only tend to last about three months after they start. So, identifying the signs of estrous can be even more critical with this breed.

Some LaManchas can go 2-4 years between freshenings and still maintain good milk production. If long-production is important to you, make sure the breeder you buy from has a proven track record of long production in the lineage you are considering.

Like most full-sized dairy goats, LaManchas can have 1-3 kids each season. Generally, does that produce twins are considered ideal for dairy production.

Birth weights for LaMancha kids typically range from 5-9 pounds. The age of the doe and the number of kids born has a significant impact on birth weights.

Kids tend to gain about 10-12 pounds per month. By about six months of age, LaMancha kids are typically reported to be between 60-80 pounds.

Doelings can be sexually mature as early as three months. They can be ready to breed as early as 7-8 months of age. However, it is generally advisable to wait until a goat reaches at least 80% of its adult weight before breeding.

Bucklings may be ready to breed as early as six months. However, there are a lot of anecdotal stories about LaMancha males being a little slower to develop. As such, some breeders will wait until the males are over a year old to use them to service their doe population.

Here are also a few genetic considerations to keep in mind when considering American LaMancha goats.

Polled genetics (naturally hornless) have been present in LaMancha breed lines since their earliest registrations in 1958. There are also numerous LaMancha breeders out there specializing in polled kids. However, there are also many references to the polled genes being less consistently passed on to LaMancha kids than in some other breeds.

Does with elfin ears are allowed to be registered. However, if the ear folds or exceeds the length requirement of 2 inches, they are disqualified from registration.

Roman noses are considered to be a defect in LaMancha goats. LaMancha’s likely had some Nubian heritage in their early breeding history, and so this does occasionally happen.

American LaMancha goats, like many other dairy goats, have about a 50/50 chance of having wattles. No one is entirely sure why wattles develop in some goats and not others. Wattles also don’t seem to be a quality that can be bred in or out of goats.

One study concluded that wattles might indicate a greater potential for milk production. However, many breeders disagree with those findings.

Goats are generally tracked by ear tagging. However due to the lack of ear cartilage for this breed, LaMancha tattoos are usually placed in the tail area.

Since LaManchas don’t have to be bred annually to produce high quantities of milk, not all owners keep their own LaMancha bucks. Artificial insemination (AI) seems to be a bit more common for LaManchas than some of the other dairy breeds.

Caring for the American LaMancha

Like all goats, LaManchas are herd animals and require constant companionship from other goats. Like the Nigerian Dwarf goats, they also tend to enjoy spending time with people. They are often almost pet-like in their desire to be with and please their owners.

As such, they often work well in herds on small farms or homesteads where they are treated as members of the family.

LaMancha goats have the same basic feed requirements as other goats. Access to pasture, hay, grain, and other feed sources may all be used to provide sufficient nutrition.

This breed is better at producing milk on limited forage than some other dairy goats. However, for long-term health, ensuring daily protein quantities of 16-18% is still extremely important. Free choice access to mineral mixes, formulated for goats, is also recommended.

Sturdy fencing is required if you need to enclose your goats to protect other parts of your landscape or to protect them from predators.

Like all goats, American LaMancha goats can be subject to parasite problems. Using rotational grazing and other pasture management techniques can reduce the risk of infestations. Providing proper nutrition and clean housing is also key to managing parasite loads.

Routine health inspections for early signs of parasite-related symptoms such as monitoring coat quality and watching for signs of anemia are encouraged.

LaMancha ears should also be checked regularly, and cleaned as necessary, to prevent infection.

Since American LaMancha goats are often kept as pets and may not free range over long distances, their hooves may require more regular maintenance. Inspect hooves often and trim as needed.

Most goats will groom their coats by rubbing on trees and fences. So, goat brushing is not required. But LaMancha goats tend to really enjoy being brushed.

LaMancha dairy goats will need to be trained to milk. This usually involves acclimating them to using a milk stand and overriding their desire to “wean you” when you take too much.

Just in case these long-milking, elf-eared beauties aren’t for you, there are several other excellent milk breeds to choose from.

In terms of milk quantity and goat size, the Oberhalsi breed of goat might make an excellent option. The Oberhalsi goat is a bit more nomadic by nature than the LaManchas and may work better if you want more independent goats.

The Alpine dairy goat is another excellent choice if you need a bit more milk production than is typical for the LaMancha. Their milk fat is a bit lower, but still well-suited for making cheese, yogurt, ice cream, and more.

The Saanen is another great dairy goat if you want more traditional type ears. These goats are white and easy to spot on pasture. Though, they will need shade protection during periods of intense sun.

“Mini-manchas”, as in LaMancha does crossed with Nigerian Dwarf bucks, are sometimes used as pets or homestead dairy goats. There are even clubs and associations for avid Mini-Mancha owners.

LaManchas today are recognized by their adorable ears. However, those famed gopher and elf ears were not originally required to meet the breed standard when it was established in 1958.

Around 1960, the breed standard was updated to include four distinct ear types. Then, in the 1980’s it was updated again to limit registrations to the two types detailed earlier.

If you want to know every bit of possible history about the evolution of short-eared goats, check out “The Tale of the Ear” by Barbara Backus. She’s a LaMancha goat breeder who has gone to great efforts to unravel the myths and mysteries around how these adorable ear shapes came to be.

The LaMancha breed may not be entirely Spanish as their name suggests. But they are altogether wonderful to have in a homestead dairy. If amiable goats, good fat content, and more milk with less breeding are some of your goals, then LaManachas might be a perfect choice for you! 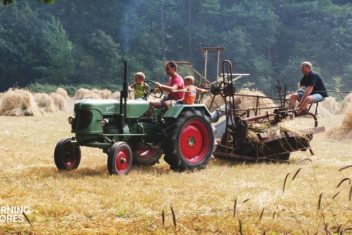 Can You Make a Living Homesteading? Here Are the 6 Defining Factors 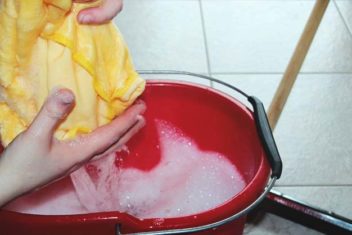