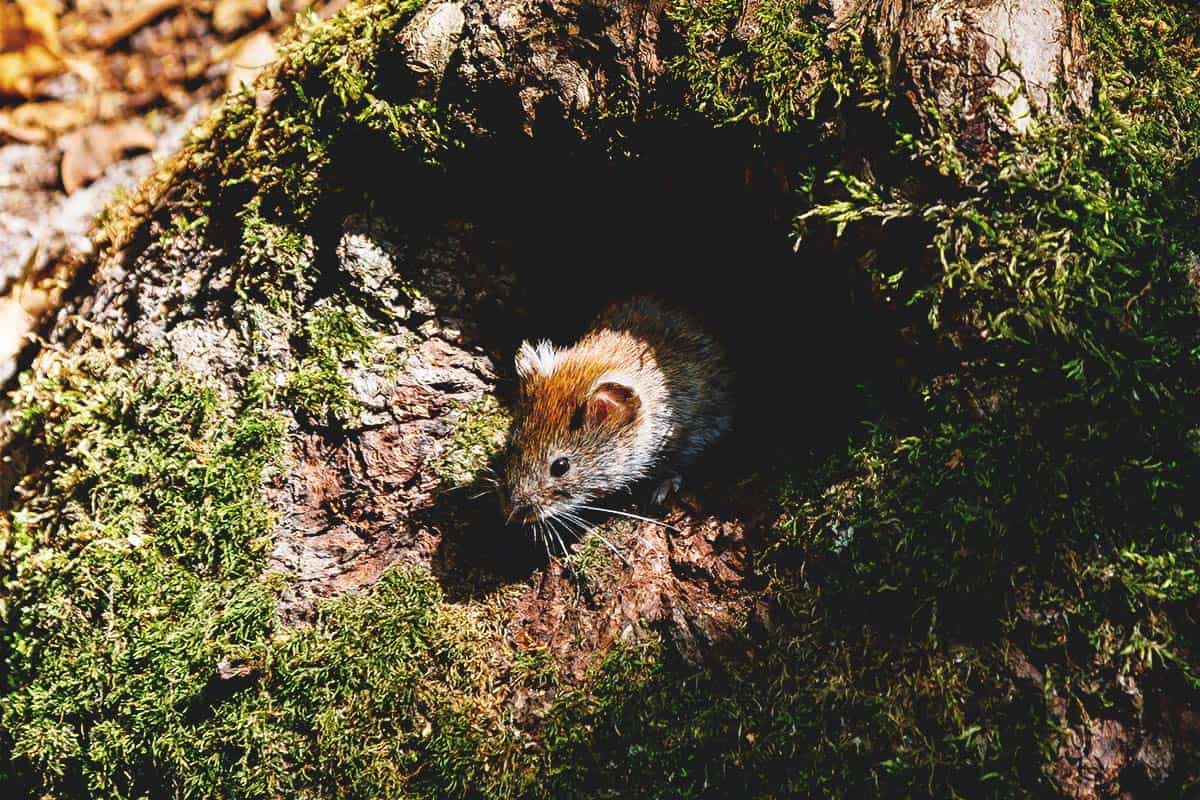 Voles are small little mammals that spend part of their lives underneath the ground, which makes them hard to detect. Even though these little critters only grow to be 5-7-inches long, they can cause massive destruction to your yard and garden, so figuring out how to deter voles is paramount.

Voles are one of those challenging issues that gardeners and homeowners might encounter, along with moles, shrews, and mice. It can be tricky to identify voles from mice; they look similar. In fact, some people refer to voles as field mice or meadow mice.

However, if you find that you have critters on your property, you need to be able to distinguish the difference between voles and real mice, because what works for mice might not work for voles.

Voles are little creatures with short tails and small snouts. They have a stocky body that is rounded and shaped sort of like a potato. Voles have short hair that is typically a color between brown and black with a darker belly.

Similar to other rodents, voles have small feet and short claws. They also have sharp teeth that let them chew on vegetation and bark.

If you get a good look at this critter, take a look at its ears. Voles have small, rounded ears that can easily be hidden by their fur, along with smaller eyes. Typically, you’ll find vole tunnels right near the surface of the yard.

If you see a critter running around in your house, it’s more likely to be a mouse. Voles eat plant life, so they tend to stick outside, while mice will eat anything, so they don’t mind hanging out inside your house where there’s plenty of food.

So you see a tunnel in your garden and you’re not sure what sort of animal is making it. Despite the rhyming names, moles and voles are not the same, but it’s easy to confuse the two since both of these animals dig tunnels throughout your yard. It might be hard to sneak a peek at them since they both spend time underground.

Once you get a good look at your creature in question, telling voles and moles apart is easy. Voles are stocky, small rodents that look similar to field mice. At first glance, you might think that you have field mice instead of voles. Moles have tiny eyes and ears, a long nose, and big front feet. Don’t forget that voles have a mainly vegetarian diet while moles eat insects and worms.

You have to pinpoint the location of your voles to be most effective with your repellent methods. The best way to find these pesky creatures is by looking for signs of vole damage.

Common signs of vole damage include:

How to Deter Voles From Your Garden

It’s usually easier to deter voles than to try and get rid of an infestation. Here are some methods to try.

1. Make Your Yard Unfriendly to Voles

The first step if you want to deter voles is to try to make your yard and garden so inhospitable that they have no desire to spend time there. Here are some tips:

Repellents don’t always have the best results and have to reapply them often, especially after it rains. You can purchase fox or coyote urine, which are two of the top predators of voles. Using this type of urine tends to send voles running the other way.

Castor-oil based repellents work well and penetrate the ground. They give vegetation a strange odor and taste that voles don’t find attractive at all. Castor oil is a preferred choice because it’s all-natural and biodegradable.

There are two different application options:

You can buy a liquid that is a concentrated castor oil solution that mixes with the water from your hose. It works well if the vole is causing issues in your lawn and garden.

The other choice is to try castor-oil infused granules. You can spread them across the affected ground. Make sure to activate the granules with water!

Lots of people swear by sonic repellents. These little stakes are solar-powered and you can place them all around the yard. They vibrate and send out sonic pulses that drive away rodents.

If you want to try to stop the destruction of bulbs and discourage voles from eating the bulbs under the ground, add some gravel into the planting holes that surround the bulbs. It helps to deter voles from taking a bite.

Young trees are a real treat for voles, but you can deter voles from taking a nibble by encircling the tree with a light-colored tree guard that is mesh. The guard needs to be tall enough to reach above the snow line in the winter. You do need to bury the base of the tree guard in the soil or have a ridge around the base.

At the same time, the guard must be loose enough that doesn’t constrict the tree as it grows.

6. Get an Outdoor Cat

One of the best ways to deter voles and other critters from your property is by getting an outdoor cat or two. Cats are a natural predator for voles, and the rodents stay clear of any property that has cats nearby. You also can try a dog, but not all dogs find searching for voles an exciting pastime.

7. Fence Around Your Vegetable Garden

If voles are finding your vegetable garden to be a 24/7 buffet, then you need to stop them in their tracks. Voles are not good climbers, so fences are a good solution. However, traditional fencing won’t work.

You need to bury the fence 6-10-inches deep first. That stops the voles from tunneling into your garden. Then, make sure that the fence is at least 12-inches above the ground. This is far from your typical fence, and it might look a bit strange, but it works effectively to protect against voles.

Get Rid of Voles

If all your efforts at trying to deter voles fails, it’s time to figure out how to get rid of them.

If you only have a small area to handle, you might try trapping as a way to reduce the vole population on your property. You can purchase live vole traps and situate them perpendicular to the broadest vole tunnel or near their favorite nesting sites.

Place traps at the base of trees and shrubs. Try setting baits in the midday to early evening because that’s the time when voles get more active. Try baiting the traps with peanut butter. You can reset the traps as often as you like until the vole population is gone.

The key to making this work is persistence. You might have to cover the traps so that they won’t harm your children and pets.

One simple way to deter voles is to find their tunnels and sprinkle irritants into them. Mix an irritant with water or soapy water and add it to a spray bottle. You’ll need to reapply frequently, whenever it rains.

Learning How to Deter Voles

No one wants to deal with destructive pests in the garden. Voles, in particular, can cause damage and wreak havoc throughout your garden and yard, so don’t ignore the problem. Instead, try one or more of these methods for deterring and getting rid of voles.

How to Get Rid of Fungus Gnats in 8 Simple Steps