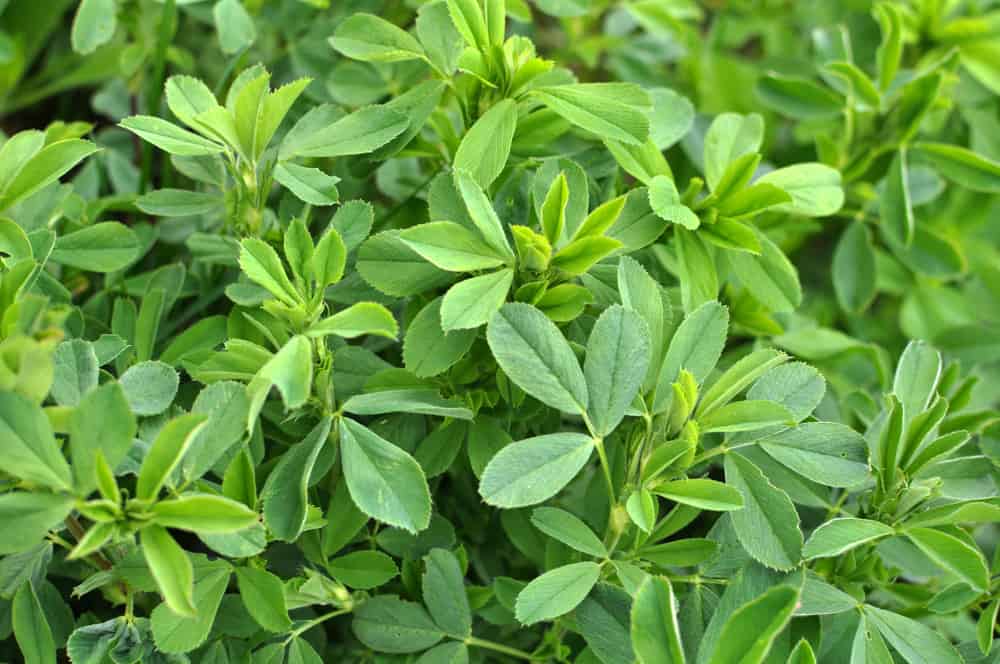 You’ve probably eaten alfalfa sprouts in sandwiches before. Or perhaps you regularly get alfalfa hay to feed to some of your herbivorous animal companions. Either way, this wonderful plant has been cultivated as a vital food source for thousands of years. If you’re thinking of growing alfalfa for your homestead use this year, read on!

It’s ridiculously easy to grow alfalfa (Medicago sativa) from seed, so don’t bother with any other method.

If you’re growing it for edible sprouts, your best bet is to use sprouting containers. I’ve grown them in mason jars too, but multi-tiered sprouting bins are ideal. Just spread the seeds around, sprinkle with water, and let the excess drain out.

Refresh the water once a day, and harvest when you’re ready to snack on the sprouts.

Alternatively, if you’re planting it outside, you can just broadcast it to your heart’s content. You can either till the soil or use a no-till method. Similarly, you can rake the surface lightly, spread the seeds out, sprinkle with a bit of soil, and then water it. Or you can simply toss the seeds around and then water them in.

This is a very hardy plant that germinates if you so much as hold the seeds in your hand for a while. As long as you’re scattering it onto fertile soil, you should have no problem with germination.

When to Plant Alfalfa

You can plant your alfalfa any time after your region’s last frost date. Cold weather will throw the seeds into dormancy or kill off young seedlings. As a result, make sure that the soil has warmed sufficiently before you go and sow yours.

That said, many people prefer to grow their alfalfa as a late-season crop. If you plant it at the end of the summer, it won’t compete as much with encroaching weeds.

Alfalfa requires about a month to reach maturity before it flowers. As such, aim to plant yours between late August and late September if you’d like to harvest it before wintertime.

Some people like to sow their alfalfa late in the year to use as a winter cover crop. Since it’s a member of the legume (Fabaceae) family, it’s an effective nitrogen fixer. This makes it excellent for replenishing that nutrient in depleted soil.

If you’ve grown green crops such as kale, spinach, etc., sow alfalfa once they’ve been harvested. Then mow them down as soon as they start to flower, and let them break down as green manure over the winter.

How to Care for Alfalfa

If you’re growing alfalfa outside, such as for animal feed, hay, etc., then it can be a bit picky about soil.

It doesn’t do well in clay-dense, wet, heavy soil. Instead, aim for well-draining, compost-rich soil with a pH between 6.5 and 7.5. If your pH is below 6, it may fail to thrive. Be sure to test the soil beforehand and amend it as required to get the pH within the ideal zone.

Alfalfa requires a lot of sun, so make sure you sow it in an area where it won’t be shaded out by taller plants.

This crop is known for being drought-resistant, but let’s not tempt fate.

Try to ensure that your alfalfa gets at least an inch of water every week. If you live in a place that gets plentiful rainfall, then the plants should do okay with whatever’s tumbling down from the sky.

Otherwise, you’re going to have to offer them some extra help with hydration. If you set up drip lines, you can keep your plants well-watered at the soil level.

In terms of feeding, alfalfa is a surprisingly greedy crop. It needs high amounts of phosphorous and potassium in order to thrive well, and it’ll deplete those nutrients from the surrounding soil.

As a result, you’ll need to either pre-nourish the soil or offer your plants a high PK feed a couple of times during the growing season.

Generally, if alfalfa fails to thrive, it’s because the soil is too acidic or doesn’t have sufficient nutrients. This is why it’s so important to test before planting anything. That way, you can amend as needed in order to ensure a healthy crop.

That said, alfalfa can be susceptible to certain diseases, as well as pest predation.

Alfalfa mosaic virus is spread by aphids, and presents as yellow streaks parallel to leaf veins. While this can’t be prevented per se, you can try to choose disease-resistant seed strains.

Root and stem rot can occur if the plants get “wet feet” for too long. The only ways to avoid these issues are to ensure ahead of time that the soil is well-draining and to avoid overwatering.

Downy mildew, anthracnose, and leaf spot are all fungal infections that can pop up during periods of high humidity combined with heat. While there are some disease-resistant seeds, your best bet is to space out seeds when sowing them.

This will allow for greater airflow during damp periods. Fungicide won’t kill these issues: if they appear, you have to cut down and burn the entire crop. Then rotate crops or let the area lie fallow for a few years.

As far as insect pests go, the primary concerns are from aphids, alfalfa weevils, and alfalfa caterpillars. Neem oil is ideal for dealing with aphids, especially if infestations are caught early.

To avoid weevil and caterpillar predation, be sure to harvest your plants early. If you harvest them before they mature to the point of flowering, the leaves should be too small to offer tasty meals to these predators.

Are you growing alfalfa in water rather than soil to consume as crunchy little sprouts? Then harvest them when the sprouts are about two inches tall. They’ll still be sweet and tender at this point, so they’ll be easily digestible. Just pat them dry with a clean cloth before adding them to sandwiches or salads.

These fresh sprouts won’t last long before they start to break down. You can keep them in the sprouting container or between layers of damp paper towels in the fridge for a few days. If they start to go brown or slimy, then toss them into the compost pile.

If you’re growing alfalfa to use as animal feed, then it’s imperative that you harvest it before it goes to flower. These flowers can be difficult for animals to digest. Furthermore, the plant’s stems and leaves will toughen up and lose both textural appeal and flavor once flowering starts.

Flowering usually starts around 28 to 30 days after germination.

How to Harvest and Bale it

The method you use to harvest your alfalfa will depend entirely on how much you’ve grown. If you have less than an acre planted, you can just go wild out there with a manual scythe.

I love these for mowing the lawn, and they’re ideal for this kind of crop harvest too. If you’re feeling particularly antagonistic towards your neighbors, put on a long black cloak before you go out there too.

If you have several acres to harvest, you can use a sickle mower or disc blind attached to your tractor.

Check the weather network before harvesting to ensure that you have a few days of dry sunshine ahead of you. The last thing you need is to have your silage dampen and rot in the field after you’ve worked so hard to cut it down.

After the harvested alfalfa has dried out for two to three days, use a baler to wrap it up into rounds or squares. Then you can either leave it out in the field, covered against the elements, or transfer it into a warm, dry barn.

Just make sure that the alfalfa is properly dried before baling it. If it’s still wet when baled, you run the risk of it composting in situ and spontaneously combusting. If you’ve put in the hard work to ensure that your animals will have good feed all winter long, then don’t put it at risk because you’re feeling impatient.

Most people aren’t aware of just how beneficial alfalfa can be for our health and wellbeing. In addition to being extremely nutrient-dense, alfalfa has high amounts of vitamins C and K, and chlorophyll. It can help to lower blood sugar, and its diuretic effects can help to alleviate edema and eliminate kidney stones.

Juiced alfalfa sprouts (or young seedlings) can be effective for reducing respiratory congestion and can help speed up wound healing. You can also apply the juice topically to conditions such as bed sores and weeping eczema. It’s a natural astringent, so it’ll dry up “wet” skin issues while encouraging healing.

Remember that food is medicine, and that which can help one person might harm another. Alfalfa seeds and sprouts contain an amino acid known as L-canavanine. While this substance might be beneficial to some people’s diets, studies have shown that it can significantly worsen symptoms of lupus. In fact, it may even cause systemic lupus in some people.

Alfalfa can have a blood-thinning effect and contains a number of hormonally active saponins. Avoid eating the seeds or sprouts if pregnant or breastfeeding, as well as if you’re already on blood-thinning medication.

Talk to your healthcare provider before incorporating alfalfa seeds, sprouts, or juice into your diet just to be on the safe side. 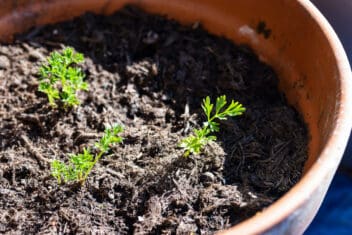 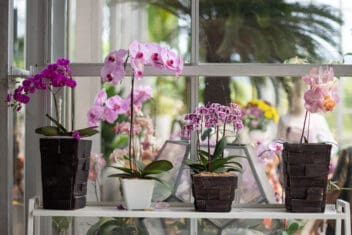 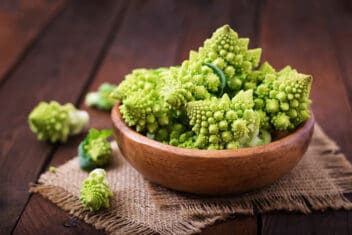 Growing Romanesco: How to Plant and Care For Romanesco 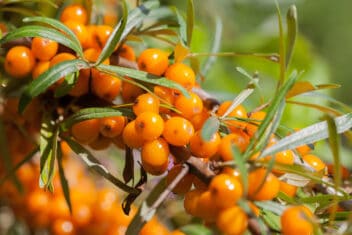 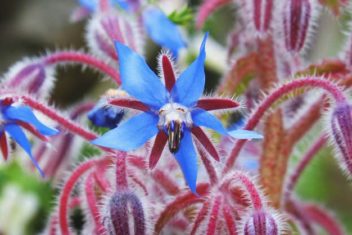